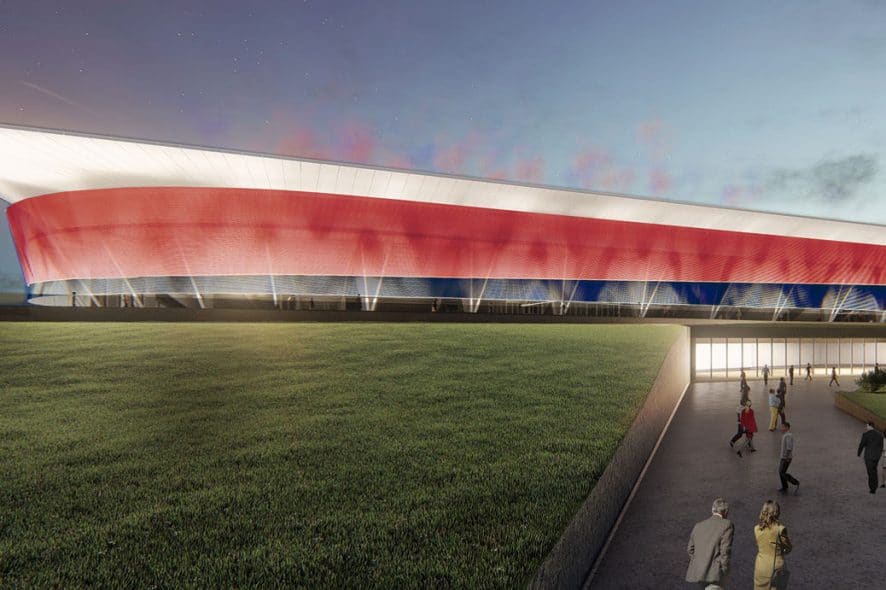 The exciting new stadium design presented by the team led by Italian firms J+S and One Works, interprets and transforms the four main requests of Cagliari Calcio to deliver: a world-class sports facility that brings with it the history and pride of Sardinia, whilst positioning itself as a standard for the future; a functional and efficient stadium that is able to stand out for economic and, above all, environmental sustainability; a destination that offers an unrivalled fan experience and is able to attract a wide range of visitors, even outside match days; and finally, a scheme that is in constant dialogue and engagement with the local community, providing a catalyst for urban regeneration.

The design of the new stadium bases its identity on the flag of the ‘4 Mori’ – a symbol of victories and the territory’s legacy but, most of all, represents a symbol of pride.

The first strong recognizable feature of the design is the bandage that surrounds the head of the Mori. This important element of the stadium will contain and envelop the structure to provide the stadium with a bold character and, at the same time, provide a flexible, customizable and animated surface.

The façade will be designed as an adaptive form, so that it can change colour in relation to the occurring sporting or entertainment event, as well as interact with the structure and its surroundings in relation to climate conditions, such as adjusting the natural ventilation in response to wind. Using the latest in innovative materials, the design allows for the use of new generation membranes that can be integrated into photovoltaics or developed with the application of “smart” fabrics.

The animated external façade will be integrated with an articulated lighting system to create a spectacular landmark. Recognisable from the city and the sea, the stadium will become a ‘Lighthouse’ for fans and the local community, providing a world-class facility with a capacity of up to 30,000. Most of all, the strong local identity of the design means that the unique stadium could not arise anywhere else in Italy, or even the world. 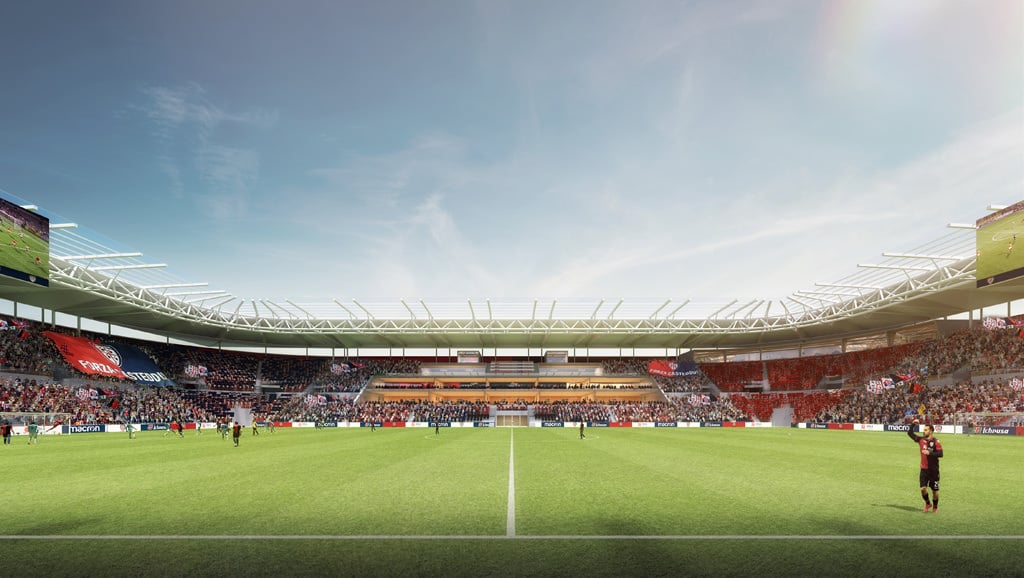 A complex that represents economic and environmental sustainability

The stunning new Sant’Elia stadium will project Cagliari into the 21st century by using the latest in design innovation and advances in digital technology, however symbolically, will be developed on the legacy of its predecessor by literally rising on it. Part of the old stadium materials will contribute to build the base (Podium) for the new landmark site, offering economic and environmental benefits to the scheme.

The rectangular system is softened and disarticulated for the main base through a series of openings that define large inclined planes that connect the stadium to the surrounding area. The Podium will become a core feature where all urban relations are stratified, promoting the stadium at key times for both for operational and complementary purposes, such as commercial, cultural and social activities. It is a feature of the design that welcomes visitors by improving accessibility and facilitating flows of people around the venue. The result is a new archeology where every function generates new spaces that are intended for civic use, entertainment and cultural events, as well as access to underground paths that reach the heart of the playing field and the stadium bowl.

In addition, the podium welcomes other elements to contribute a positive relationship with the waterfront through a number of structures that have their own autonomy: the Hotel and Spa, the Business Center above the local Museum, the small glazed building that identifies the museum of Cagliari Calcio, fan shop, a boxing gym, a music venue and a local clinic. 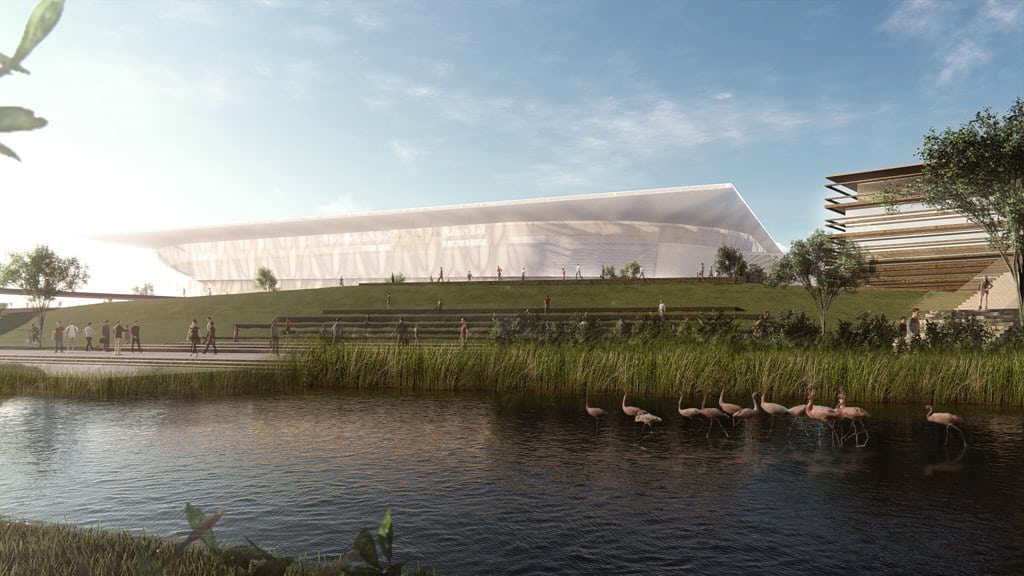 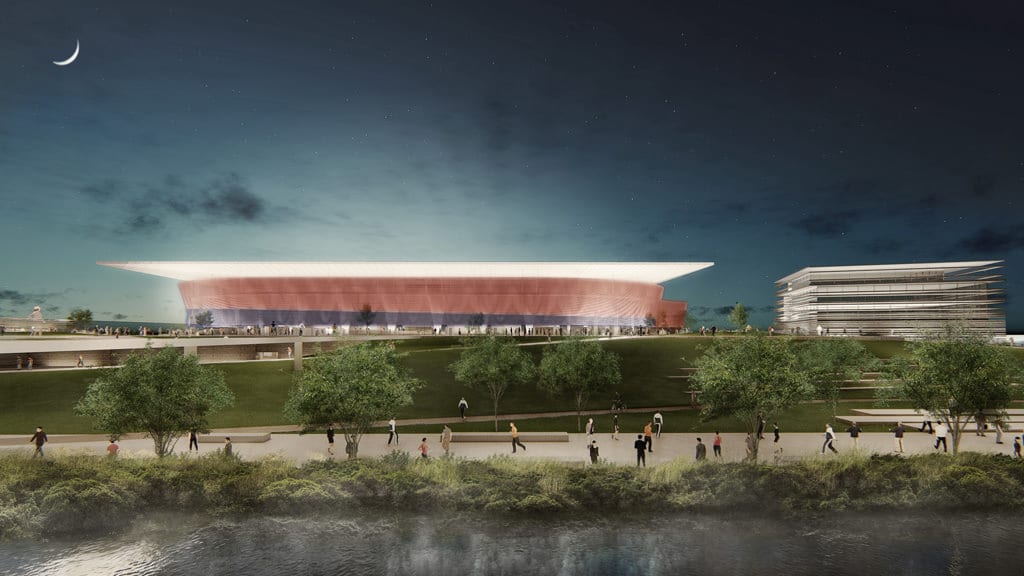 At the heart of the scheme is the bowl. Designed to be a flexible structure, the bowl symbolically emerges as a landmark for the area that, like a modern nuraghe, establishing relationships with the territory. Designed to accommodate 24,000 spectators, it is prepared to easily expand to accommodate events of a European scale (up to 30,000) without any structural changes. The main stand will be equipped with all the functions to guarantee a high-level of hospitality for an unrivalled fan experience, providing a range of services including quality catering, conference and meeting facilities, museum exhibitions and all-round entertainment attractions that go well beyond the needs of reception on match days.

It will be these added-value elements of attraction that will allow the stadium to live every single day of the year and be enjoyed by the entire city. It is also means that a quality Hotel and other leisure and sports activities, such as a skate-park, a bike circuit and a kid’s park along the waterfront can be successfully integrated into the site and maximize the offer to the local community. 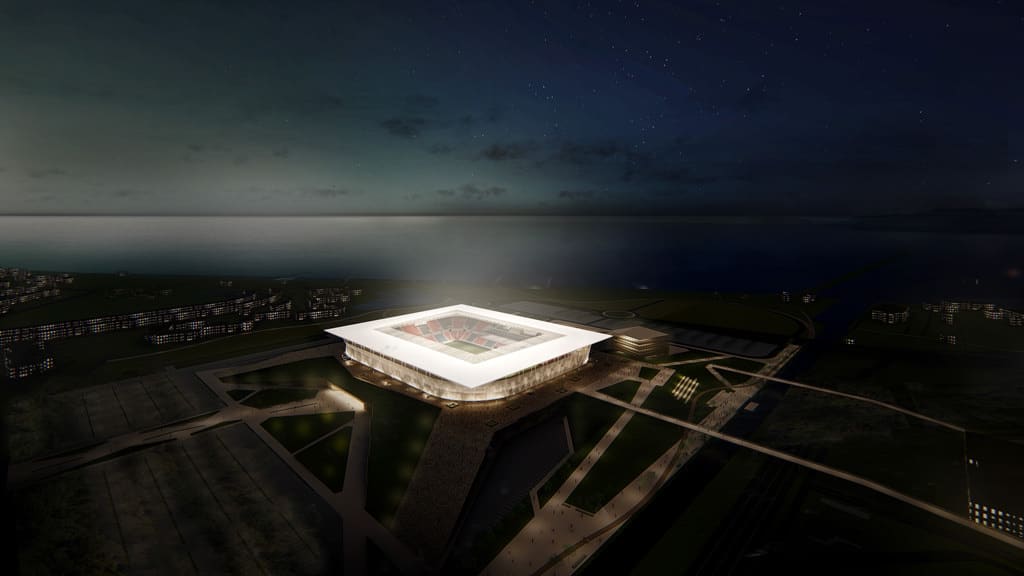 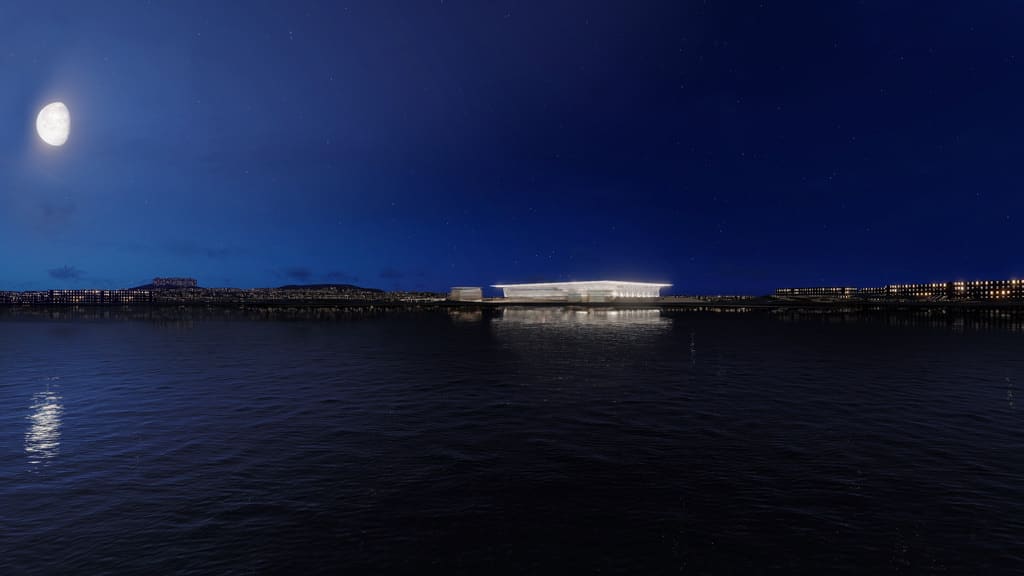 A catalyst for urban metamorphosis

The fourth, and final, fundamental element to characterize the stadium and unify the project, is the light and dynamic basin cover that protrudes over the podium to offer shelter to outdoor spaces.

This coverage plays, not only a functional role, but more importantly a symbolic and strategic one with the upwards light being contained to amplify the true effects of a ‘lighthouse’. The light is then directed to the base, indirectly illuminating the entire podium and enhancing the various architectural elements to create a pleasant environment for fans and visitors to enjoy.

Horizontally, the cover has been designed to invite and trigger dialogue with the surrounding environment to promote urban metamorphosis. The coverage becomes the strongest element of  openness and exchange with the city and its people.

The integration of these important elements will create a stunning new stadium and wider complex that will deliver an unrivalled fan experience and significant benefits to the local community– creating a world class sports and entertainment destination that is a symbol of the long and proud history of Sardinia. 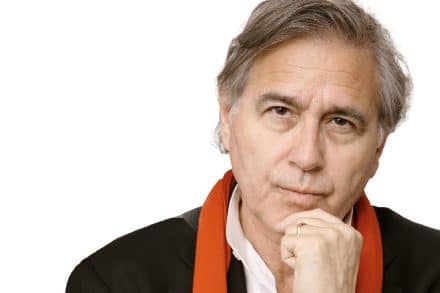 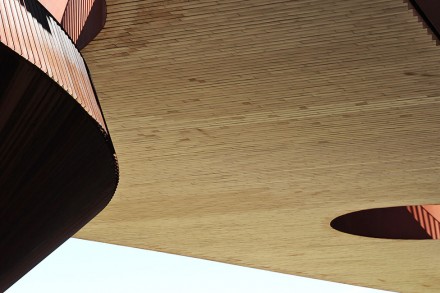 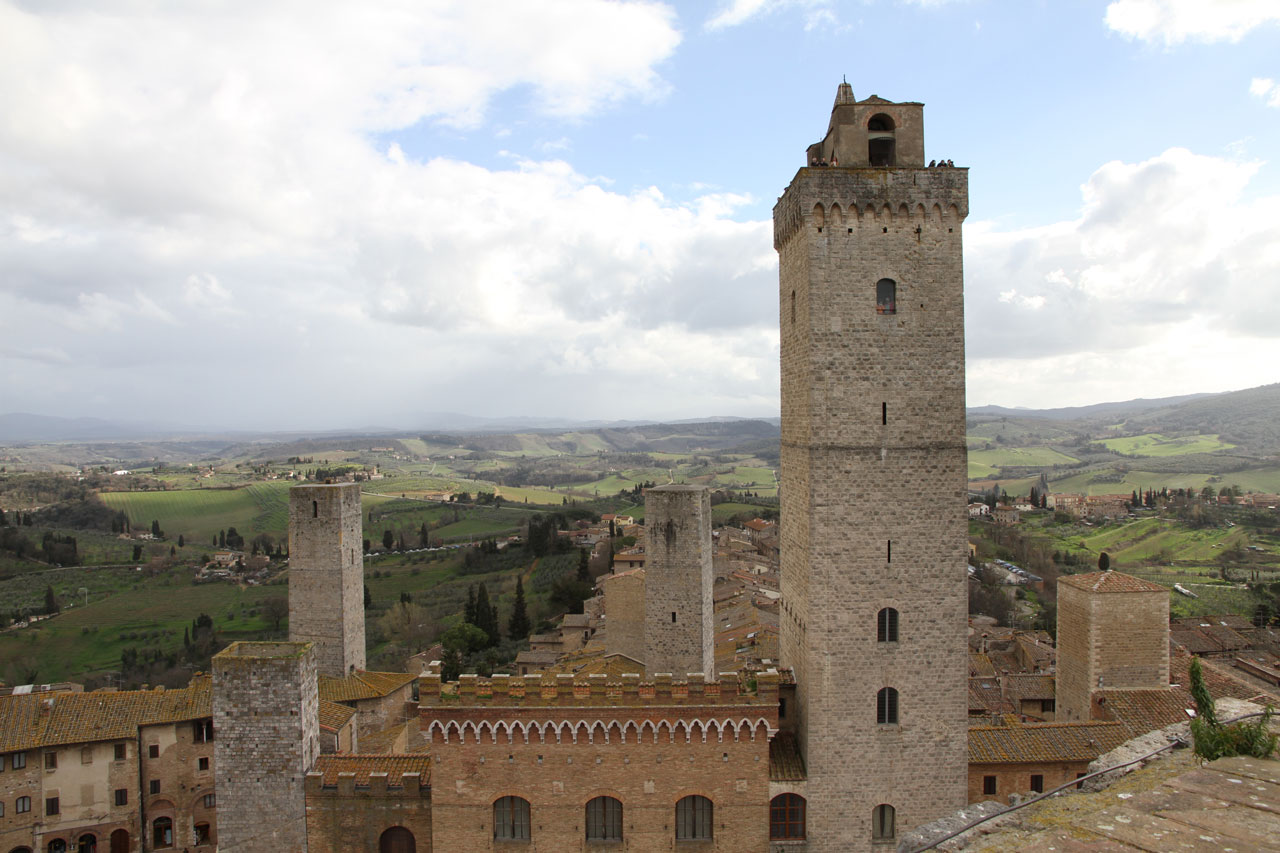 San Gimignano, Tuscany – Where an architect has much to learn